One day to go. Hard to believe. Just a bike, a swim and a run and the athletes are done. We don’t make it easy though – the final day of camp involves a time trial on the bike, a hard swim and some form of run race. I don’t want athletes going home feeling they didn’t get value for money.

First, the time trial, a trip up Tabayesco for everyone on camp. This week conditions have been benign and Friday was no exception; just riding to the base of the climb was far easier than the week before. As I didn’t have to worry about a race I couldn’t resist putting in an effort along my favourite stretch of road. Most of the athletes sensibly dawdled behind, keen to save their legs. 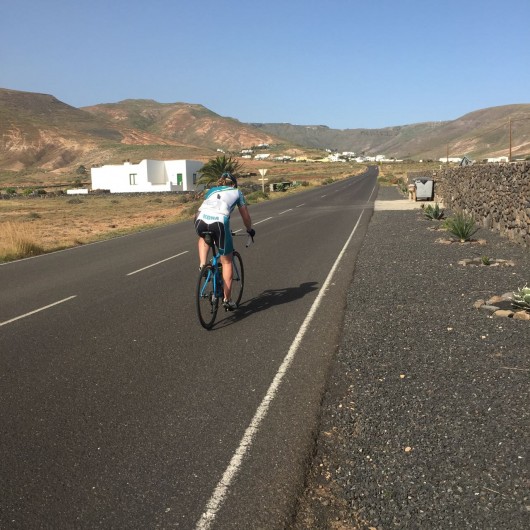 We gathered at the base of Tabayesco two short – back at the hotel Andy’s bike had issues and Steffan had stayed with him while he got it fixed. It looked liked they’d miss the fun. At minute intervals, slowest to fastest, I set each athlete off; first Kathryn, last George. Then, untimed, I followed behind.

Coming out of town I could see a battle up ahead: George had rapidly closed on his minute-man Simon who wasn’t going to let go. They were soon out of sight though. I didn’t have the legs to keep in range of the pair of them. It wasn’t long before I caught Kathryn, much sooner than I might have expected; she was struggling at the end of a big week. I rode with her through to the start of the switchbacks, before pushing on to the top.

Last week, in tough conditions, the group had failed to break 30 minutes. This week, in lighter winds and with a little team work, we had two under that mark – George produced a 28:30, Simon stuck with him for a 29:30. Decent efforts regardless of weather. Kathryn was the final rider over the line, she’d made her way up as best her legs would allow.

That wasn’t quite the end: shortly after Kathryn, Steffan arrived. He’d raced to the start line with Andy and chased up behind us; finishing in an unofficial Garmin time of about 32 minutes. Andy, though, was a way back. He’d had his cassette replaced, but all the shop could offer was an 11-23. An unusual choice for the island, and not one suited to the climb. He’d ground his way up at the back.

All together, we rolled down the hill to Teguise and straight into Jonnie Bakes.

One down, two to go. Next up the swim; a tough little session set out in the table above. The fastest lane went off as planned, but for the other two I adjusted the set a little, throwing in some easier reps to break up the hard efforts. It was satisfying to see some of the technical work and review being put into practice in the pool. Some good progress being made in short time.

We’ve always finished with another 5.4K run. Last week we adopted a handicapped format to keep things interesting. This week I wanted to mix it up again, not least because only 6 athletes turned out for the race. Helpfully, Frankie suggested team relays. Perfect. Three teams of two racing over 6 laps, each athlete completing alternating laps. 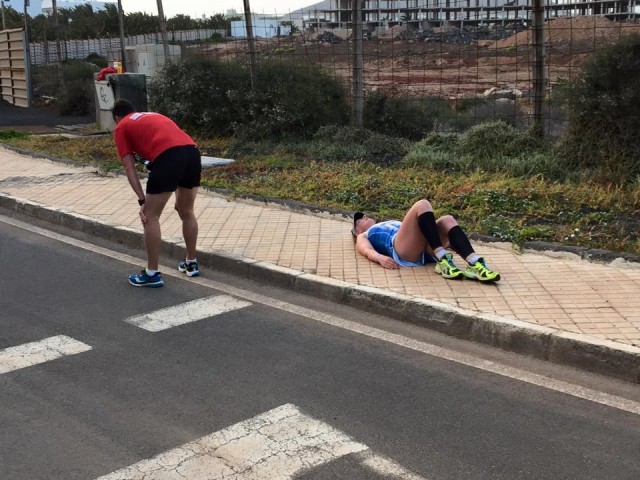 I’m very happy with this new format. Rather than a 5.4K slog we effectively had three 1K best efforts on 4 minutes recovery. Deficits in speed were often overcome by determination over such a short loop and all six dug deep. Very deep. I’m not sure Frankie was quite as pleased with her idea once it was put into practice, but it was the perfect finish to camp. Simon, paired with Chris, finally beat his camp nemesis, George.

And that was that. Time to pack up and go home. The only other item on the schedule was a trip to the bar. Another great week of camp done. Thanks to all the athletes for helping make it so enjoyable and to David for supporting throughout both weeks of camp. I’d questioned this in the weeks leading up to the camps, but I will be back for more.