Nothing sparks interest in race statistics like an unexpectedly tough event. We’ve seen a few so far this year – rain in Cork, heat in Frankfurt and a new bike course in Bolton. The slower race times and high levels of drop outs resulted in high levels of traffic to this site and plenty of discussion. This interest has led me to re-examine the available data on DNS, DNF and also DQ at Ironman races.

The result is the above table of the twenty highest DNF rates since 2012. Those races that have seen a significant drop out rate on race day. Where I’ve written an analysis of the race I’ve also linked through to that for those who want more statistics.

The most common theme that ties these events together is unexpected circumstances on race day. Often this is high temperatues as we saw at the table topper, Frankfurt, this year. Equally it can be down to cold weather as at Lake Tahoe or heavy rain as in Cork.

Ironman UK is a little more unusual in that it’s high DNF rate this year appears to be a result of changes to the bike course 4 months before race day. These appear to have significantly impacted on the completion rate with 14.4% DNFing on the bike, 5% of that due to missing the cut off. Conditions were normal, but the route was unexpectedly challenging for many a competitor. 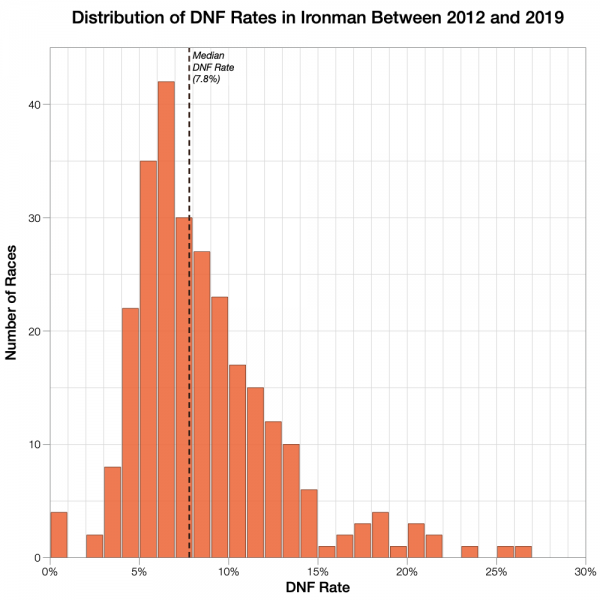 The twenty highest DNF rates represent an extreme. Plotting out all the DNF rates over the last 7 years into a histogram gives us a picture of what constitutes the norms for DNF at Ironman. The majority of races have a DNF rate below 10%, above that we’re starting to look at higher than normal levels. In fact we could simply divide things into 5% brackets: below 5% DNF is low, 5-10% represents a typical level, 10-15% is a high level, 15-20% is exceptional and above 20% is extreme.

Ultimately though, DNF rates don’t tell us much about the overall qualities of a race. They give a clear indication of the potential for wide variations in times on some courses. Frankfurt is known for producing fast results, except for the years when it’s hot. Then things slow and the DNF rate shoots up. In that sense variation in DNF rates over the years might tell us something about how variable the results are for a given race.

We can see this in the Frankfurt table. I’ve again linked to individual reports where I’m able. the hot years see an increase in DNF rates, other years aren’t particularly bad. Frankfurt is an interesting example due to its 15 hour cut off. On a hot year, if you slow, you’re pushed towards that closer cut off. Entrants know the cut off times, but they don’t know if they’ll be an hour or more slower than anticipated on the day.

I’ll finish up with some commentary on the data and how I interpet DNF data in my analyses.

Prior to 2017 Ironman’s results didn’t give a clear indication of how many people DNSed a race or how many DNFed. For the most part the DNFs were easy to deduce by the absence of an overall time, but in instances where no splits are recorded you couldn’t determine if that was a DNF or someone who didn’t start.

Now it’s much clearer with every competitor either having a finish time or being marked as DNS, DNF or DQ. This is even true for older events – while they may not have presented this information at the time they do now. So, I’ve been able to trawl through the results archives and update my own database. The key limitation here being I am dependent on the Ironman results pages being accurate in this regard.

Where I present DNF rates for individual splits as in the Frankfurt table above. I have to make a few assumptions to calculate these. Athletes marked as DNF who lack a swim split and/or a T1 split I count as swim DNFs. For the bike it’s those who lack a bike split and/or a T2 split. The run is simpler – those who lack an overall run split. It is possible data errors may throw these numbers a little, although I’m confident of the overall DNF rates.

Moving forward, as long as Ironman continues to provide this information the DNF statistics I have for races will be precise. I’ll continue to provide DNF rates as part of individual analyses as another indicator of the nature of the race. And I imagine races with exceptional DNF rates will continue to draw a lot of interest and discussion.