A fresh bunch of athletes have arrived for a week of early season, high volume training. Most are veterans of last year’s camp returning for more of the same. We will not be going easy on this group; I suspect they won’t go easy on us.

The first full day of training allows us to gauge placings for the rest of the week. Starting with a relatively short and easy ride in comparison with what’s to come. This time we headed north to Orzola, climbed to Mirador del Rio and then returned to Arrieta via the town of Haria before riding back along the LZ-1 highway. The group split almost immediately; we have a broader range of abilities this week, from sub-10 to 16 hour Ironman so it was to be expected. I stayed back with the slower cyclists to guide them through the route while Mark stuck with the faster group.

As expect there were some strong riders up front and we can see that they’ll be 3 groups on the road this week. A little more challenging to manage for Mark and myself. Of more concern, one of our athletes, Tim, had developed a chest infection right at the start of camp. He attempted to ride yesterday, but was seriously off the pace and it’s clear he needs to rest. Unfortunately that means he’s come all the way to Lanza to stay quarantined in a resort apartment until he’s recovered. We’re hoping a trip to a Spanish pharmacy will find some drugs potent enough to have him training by the end of the week. 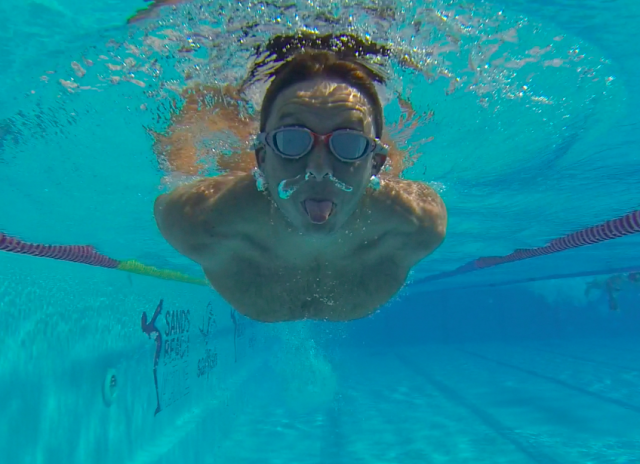 Once the athletes had returned it was a quick turn around to the afternoon swim session – I had 30 minutes to shower and get ready, lunch was a packet of nuts. The Sunday swim was an easy session: a warm up then 6 lengths filmed from various angles for later analysis. It gives us a chance to take a closer look at the athletes technique and feed that back into the sessions ahead.

Finally we closed the day with the 5.4K run race. As last week 5 tough laps around the unfinished hotel block. In stronger winds than last week a more tactical race developed: Steffan opened quickly with a group of four, Paul, Rich, Gary and Steven (not doing bad for an old bloke), chasing not far behind; the positions remained the same until the final lap where Rich made his move closing with a 3:34 lap to take the win. Steffan and the remaining three following shortly after. Running is not a major emphasis of camp, but hopefully that took something to of their legs. 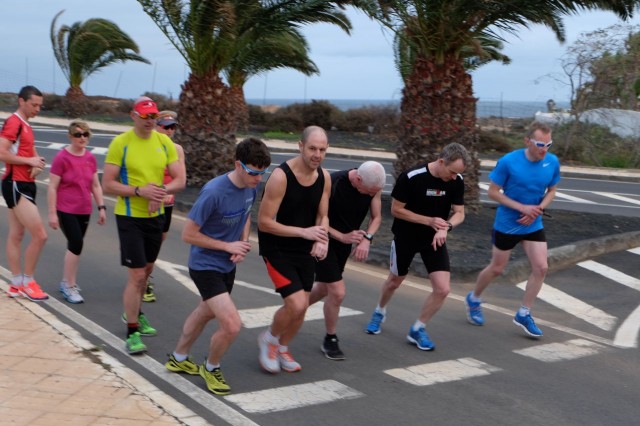 Probably the most satisfying aspect of this first full day was seeing the improvements many of the camp veterans had made since last year. Across the board – swim, bike and run – we have fitter and faster athletes, a great sign at the start of the season. To counter that there’s the frustration of Tim’s illness, hopefully he’ll recover and have a chance to train on the island. Overall it’s been a good start and I’m looking forward to the week ahead.