Now we’re into the main event: 16 athletes compared to 7 the week before. It takes more organisation and work to keep a camp running smoothly with so many athletes. We started well – we may not have left precisely at 9am, but we had all gathered at the front of the hotel. Once a few tyres were pumped up and I’d given a final briefing off we went on the first ride of camp. 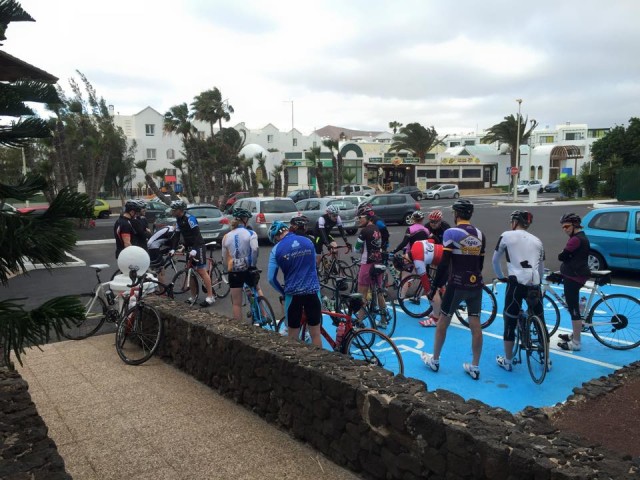 The weather – let’s get it out of the way – still windy. Last week’s conditions held on for one final day. A tough introductory ride, but if the athletes can cope with this, they can cope with anything the week has to offer.

I started up front, mainly to ensure that this group didn’t go wrong at the first roundabout. Right, not straight through. With everyone on the right track and a few old hands amongst them I dropped back to be with the steady group. In the first few kilometres the divisions in this week’s camp were already becoming clear.

And then I punctured; a small shard of glass embedding itself in my tyre. The steady group was making even steadier progress than expected. It was only a 2 triathlete puncture, so I sent most of the group up the road while we repaired the damage. We caught back up in time to enjoy the rough Nazaret road with the rest.

Then down, pushing our way through relentless headwinds, to Famara. At least the ride back up to Soo had an equally powerful tailwind to aid us. I opted to shorten the ride, cutting back to the middle of the island and returning via Nazaret (an unpopular decision, the road is worse in that direction) to minimise cross winds.

Consulting with David, we’ve concluded this year’s camp has a large mid-pack with a few athletes either up the road or behind. Slightly more challenging to manage, but I’m sure we can keep everyone riding well. 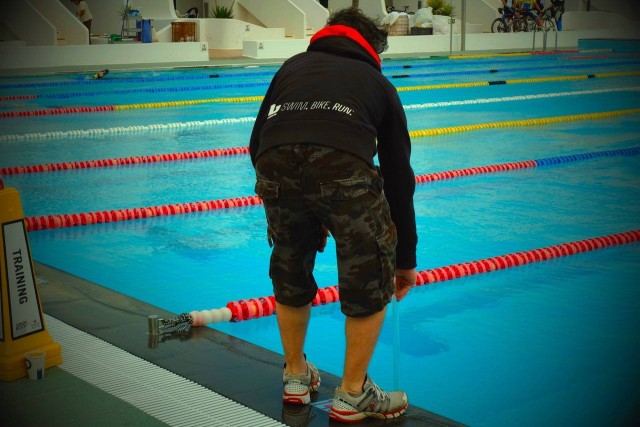 Ride done we gathered at the pool for video analysis. Same procedure as last week, but I managed to mess up the underwater segments meaning I’ll need to film them again to properly frame the athletes (I’m sure they won’t mind missing some of Monday’s set for this though). We’ll be reviewing them later in the week – I’m trying out a new system using Ubersense on an iPad connected to a flat screen so we can analyse swims in groups.

The final event of the day was the 5.4K run race. Nine of our athletes started, eight finished. Conditions were still windy which makes the course that bit more challenging. It was close racing for the first few laps, but gradually Steffan pulled away from dark horse George (we’ve discovered he’s a pretty good swimmer, cyclist and runner today) to take the win. Finish times weren’t too spread out which should make the handicap race on Friday all the more interesting. 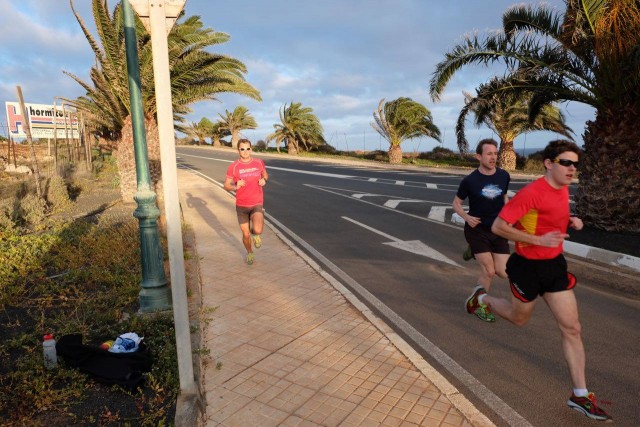 A packed first day of training. We’ve only begun and people are already tired. Hopefully they’ll pace themselves sensibly over the rest of the week.