As our second week of Lanzarote training came to an end so did the high winds on the island. This week’s group has dealt with tough conditions, winds never allowing an easy ride and sometimes pushing the limits of comfort. They got through it though, along with some hard swim sets and a good volume of running. Even if the weather was going easy on them we weren’t, the schedule for the final day was a time trial up Tabayesco followed by a 5K birthday swim.

Compared to the first week we had an easy ride to the foot of the Tabayesco climb. The group spun along at a reasonable pace, nobody looking to work hard before the time trial started. At the foot of the hill things got more serious and while Mark rode on ahead to time keep athletes started emptying bottles on the road. As last year we seeded athletes slowest to fastest and set them off at minute intervals once Mark had an adequate head start. 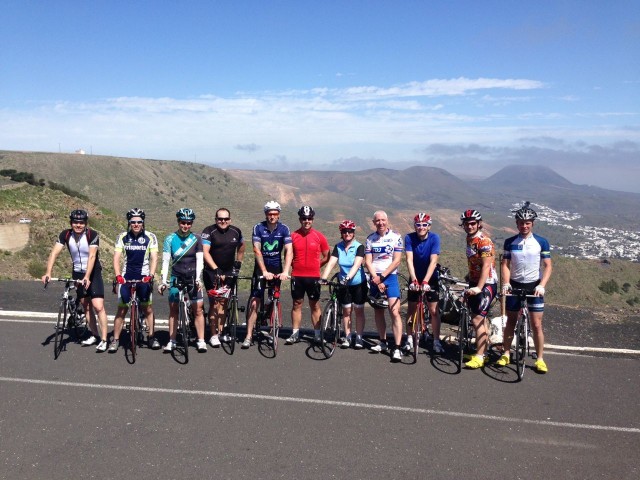 One by one they flew off down the road, swerving round the large German group starting their time trial 50m up the road from us (it’s a popular climb). Once Rich, our fastest climber, was off I hopped on the bike and made my own, untimed way up to the top of the mountain. My view of the climb was relaxed, I didn’t go easy, but I certainly didn’t time trial and only caught Kathryn on the climb. For the others this was a proper time trial and no underhand tactics were on display this week.

Rich powered through the field to finish fastest in 28:10, then promptly vomited over the line; mercifully the GoPro on his helmet only picked up the audio. The others all clicked through afterwards having found something left in their legs for a final effort. Once we’d regrouped at the top we rolled down the other side of the hill for another trip to Jonnie Bakes in Teguise. It seemed appropriate to finish camp with a coffee and cake stop. 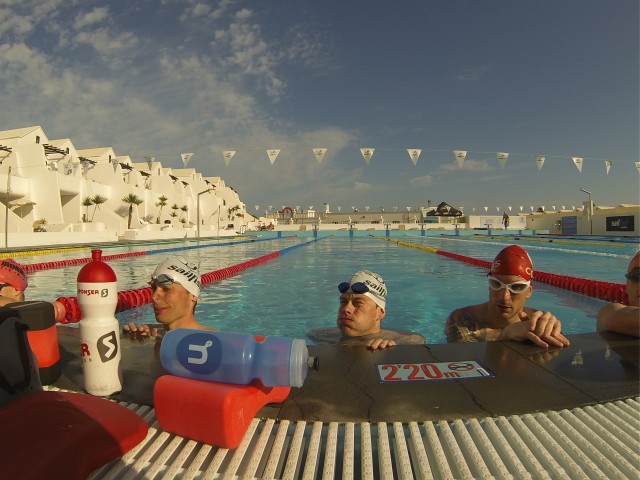 Not that camp was over, there was still a swim to go. Steve will be 50 in a few more weeks so we felt we should celebrate his birthday with another 5K swim set. The response was remarkable – athletes who have happily extended bike and runs were concerned about this extra volume. We weren’t listening – you needed a good excuse to cut this set short.

We went easy on the group – Kathryn’s 40th birthday is next week so we split the difference and gave them a 4.5K swim set to finish the week. It was, by this point, enough; they’d worked themselves hard for 6 days in a row. When the last one jumped out, that was camp done.

Dinner was relatively subdued, well except Steve, but it’s hard to subdue Steve. Then it was over to the bar so everyone could sit in a group tweeting each other! It didn’t go on as late as earlier in the week, but we enjoyed a few drinks and a chance to relax without the pressure of an early training session the next morning. That was it for camp.

This morning I’ve seen most of the athletes off. Tired, but happy with the week and the training they’ve managed; they should see the benefits in coming weeks. I’ve one more day to relax at Sands Beach before I head home. Two weeks is long enough and I’m looking forward to returning to cold, damp Bristol.