Yesterday I mentioned how there are days when you wake and know won’t be biking. While Tuesday had pushed towards that, Wednesday crossed the line. Fortunately Wednesday was also the camp easy day when long hours of training were replaced with a short, hard race. 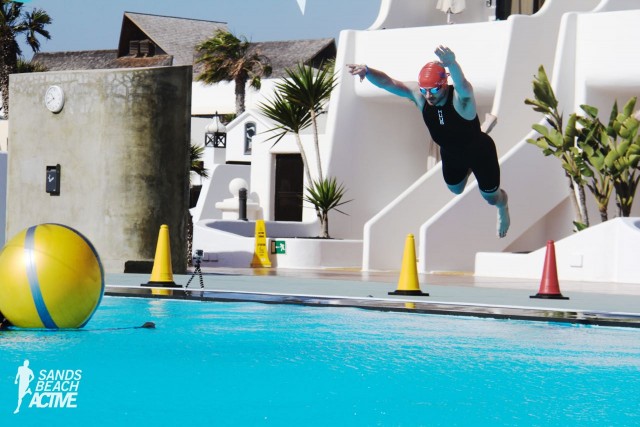 This year’s format was an elimination sprint aquathon; an idea formulated in the bar. Three rounds, 6 athletes start, two eliminated each round until a final head to head. The distances: 1.2K run, 200m Swim, 1.2K run. A contrast to the training we’d been doing so far.

We’re only a small training camp, but Sands Beach Active didn’t hold back. We had buoys set out in the pool, matting down for transition, a finish line marked with flags and a big timing clock, music playing and more media coverage than an Ironman! We had cameras in the pool, cameras on the course, cameras on the finish line. We already have a race video:

With all this in place six athletes lined up on the start line for round one. It’s the same each year – for all the grumbling about being tired and unprepared they race hard. Sure, there are tactics with an elimination race – you just need to go fast enough to stay out of the bottom two. Even so, I don’t think anyone went easy. 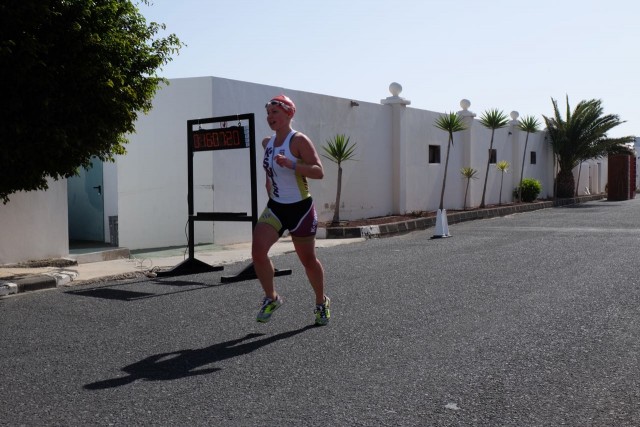 Round one went as we’d predicted: Jon and Leahn taking first and second; Steve and Michal in third and fourth; and Claire and Maria in fifth and sixth. I will probably handicap it in the future to make things a little less predictable. Once everyone had finished we regrouped; round two would be Jon, Leahn, Steve and Michal.

Round two saw some new tactics – Leahn, the slower swimmer, attempted to put enough time into Jon on the first run to have a fighting chance of a win. It almost worked, they exited the swim together, but Jon took Leahn at the line. Michal pulled out all the stops to come in third, almost collapsing at the finish and Steve came in a few more seconds behind that. 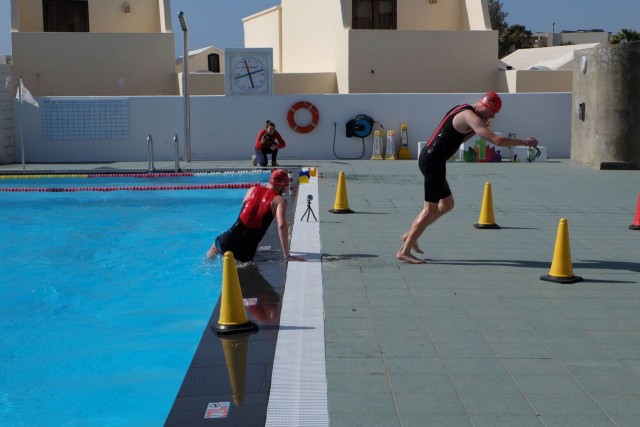 Round three and we were down to just Leahn and Jon. Unfortunately Leahn had injured his shoulder in the previous round and it showed. Jon comfortably took the first run and with the faster swim – especially now Leahn was suffering – had an easy path to victory. Still, he didn’t hold back and clocked his fastest overall round as well as taking the win. 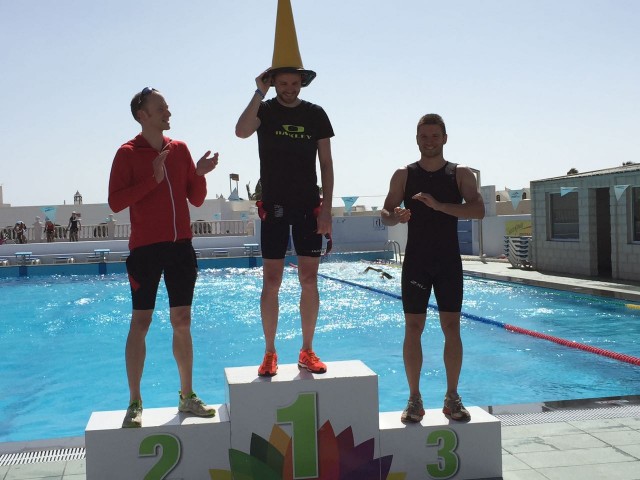 To cap the race off we even had a podium for our finishers! And courtesy of Simon – who I will be closely watching when he races next week – a crown for our winner.

And that was it. I handed out swim sets to a few and gave a bit of one-on-one coaching to Michal in the afternoon, but other than that everyone relaxed and enjoyed some sunshine (we’ve not seen much this week). Easy day is my favourite day of camp, it gives the coaches time to relax especially when Sands Beach do so much of the work for us. I can’t wait to see next week’s bigger group race now.