☰
Home > Ironman Analysis > What Does It All Mean?

What Does It All Mean?

For the last month, since the Ironman World Champs, this blog has been dominated by a loosely connected series of posts around race results and statistics. I slipped in an announcement of my training camp, proposed a yet to be started series of posts on power based training and once or twice looked at race power data, but mostly I’ve written about stats. You have to navigate back four pages in my archive before you’ll find anything that might qualify as coaching advice – ostensibly the purpose of this blog; a solid month of data is a departure from my normal themes. Which led a friend – who’s followed this site in its evolution from personal blog to coaching blog – confronted by an overwhelming numbers of graphs, tables and charts to ask: what does it all mean? 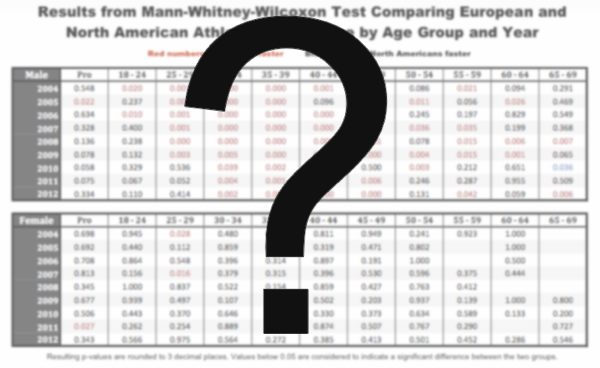 My approach has been ad hoc – from idea to graph to new blog as they occur to me. I’ve jumped from posting up new result sets, comparing age groups, comparing performances between races and years through to comparing nationalities at Kona and analysing the requirements to qualify in the first place. There is no narrative thread, nor clear framework as to how this information is beneficial to the long-distance triathlete in general, at least beyond placing performances in context. Which leads to that question of meaning.

My own interest comes from a slightly compulsive need to see data to backup assertions. Does a faster bike actually impair run performance? Which races are faster, or more controversially, easier? Where is the best place to qualify and what time is required? There are plenty of opinions on these topics, evidence is much thinner on the ground. Having the skills to retrieve and manage the data, along with the free time at the end of the season I’m in a position where I can attempt to provide evidence.

Justification aside, what has it all meant so far?

I started back in July by examining how triathletes performed in each discipline at Challenge Roth, and in particular the relationship between performances across disciplines. That led to a more detailed, although inconclusive, attempt to test if faster bikes meant slower runs. And finally a look at how long-distance triathletes paced their marathons in comparison to marathon runners – an idea worth revisiting as my collection of results grows.

Kona regained my interest. Important in that it motivated me to build the tools that gather race data from ironman.com, although at that point I largely used it for visualisations, looking at the performances in different age groups. A brief foray back into the relationship of bike and run brought no new insights, but did result in some more precise analysis by a reader that similarly failed to show a significant relationship. Later things got more interesting when I addressed the question of who are faster, Europeans or North Americans – more statistics, a look at the impact of the lottery and a chat with the IMTalk guys followed. Not that we can use that data in our training: moving to Europe will not increase your speed. So more practically I made a start at examining ways to determine the times required to qualify at a given race.

The third area that I’ve looked at – the distribution of finishing times for Ironman races both in a given year and then across multiple years, is a tentative step towards quantifying the relative challenge of different races. Very tentative; so far I’ve largely observed the apparent patterns in skew and variability in the graphs and speculated on their interpretation. I took the time to dig down to the age division level for Arizona, time consuming and offering only a small amount of additional insight. Again we can’t do much with the information at this point other then, perhaps, better understand the nature of the races we choose.

And while all that has been going on I’ve continued to retrieve results and splits for each Ironman since Kona – Florida, Arizona and Cozumel so far.

Having done all this I’ve come to the conclusion that interesting as the occasional dips into these questions are, they should be occasional. At least until I’ve spent the time needed to address the more detailed questions of relative Ironman performances and improved Kona qualification choices properly. This post is intended to bring a partial conclusion to the recent run of statistics. I’ll still regularly return to this topic, but it’s time to focus on the coaching elements of this blog again; not least making progress with the starters guide to power training.